As a financial and accounting recruitment firm, Burchard & Associates focuses on one thing: People.

Every day, we meet with members of the St. Louis financial community. We learn why they want to make a move in their career, the qualities they are looking for in a company and peers, and why they decided to enter the financial industry in the first place.

We dig deep into our clients’ and candidates’ professional lives, but we also know they are more than just accountants and CFOs. They’re passionate triathletes, jamming band members, dedicated volunteers, and wanderlust travelers.

We wanted to know more about the financial professionals we work with—outside of their 9 to 5 jobs. What do they do after they close down for the day and head out the door?

We sat down and talked to them to find out more about their lives beyond the office. 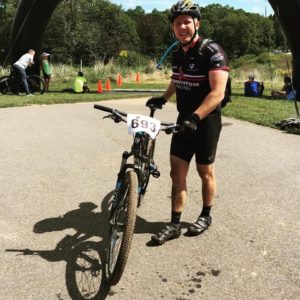 Some people sit in the break room and chat about the weather. Brett Hatch would rather talk about triathlons.

When the Atlanta-based finance director of Amdocs, a software provider that works with communications businesses, isn’t leading the financial decisions for the company, he’s usually swimming, biking, or running.

He has quite a few triathlons under his belt. Twenty-five of them, in fact. But he didn’t pick up his side hobby until after he turned 30.

“I started my professional career very much focused on my [job] and didn’t pay a lot of attention to my body and health,” Hatch says. “On my 30th birthday, I looked at my picture and realized I gained too much weight and reintroduced myself to exercise again.”

His newfound fitness habits led him to start running, and he eventually completed five marathons (26.2 miles). Then he and his wife wanted a new activity that would keep them active and also allow them more time to raise their family.

“We enjoyed it, but realized the time commitment to prepare for a marathon was quite significant with busy schedules and kids, so we needed something else to do and wanted to try something else, so we went into triathlons,” he says.

They started their new journey by learning how to ride bikes more competitively, but swimming with speed became the most difficult leg of the race. Both knew how to swim, but neither had ever competed in the sport.

They’ve traveled around the country to compete in Florida, St. Louis, and Michigan.

Hatch views competing in triathlons not only as a way to improve his health and train and have quality time with his wife, but also as a way to become closer to his colleagues.

“Triathlons really go hand-in-hand with the work environment,” he says. “At work, you’re always looking for an excuse to talk about something that happens outside of the four walls of the office. A lot of people enjoy jogging or swimming or biking. I’ve been able to put it all together, so it becomes a very nice topic to talk about.”

As for his competition, he enjoys having a friendly rivalry with his wife — even though she usually beats him to the finish line.

Finding the Funk at 40 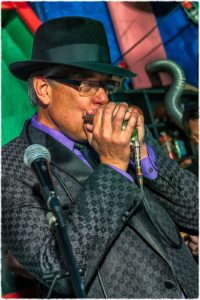 John Willis always knew he wanted to go into accounting. His musical talents, however, didn’t emerge until his 40th birthday.

To ring in the milestone, Willis’ mother gave him a guitar “because it just kind of interested me,” he says, even though he had no clue how to play it.

He soon enrolled in guitar lessons where one of his early assignments was to come to class with a CD of four to five songs he liked with the hopes of eventually learning how to play them on the guitar.

Willis did just that — though he immediately came about a roadblock.

The guitar teacher “took it and listened to it and said, ‘Every song on here is a harmonica song and not a guitar song.  If this is the music you love, then you need to be playing harmonica and not guitar.”  Willis said, ‘You’re out of your mind!’ but eventually came around and made the switch and signed up for the store’s introductory jam class (his words) where he learned how to play harmonica with a group. He enjoyed the aspect of playing with others, but the class abruptly ended when the instructor moved, which led Willis to form a band of his own.

During the new group’s first practice, Willis had an unfortunate run-in with a bottle of wine and ended up in the ER with a cut to the face, which led to his nickname: Scarface.

The rest of the group needed a name, “The band said, ‘What’s going to go with ‘Scarface’?’ and we ended up coming up ‘Mobsters,’” he said.

And thus, the band Scarface and the Mobsters was born.

After jamming together for a few years, Willis’ 50th birthday was quickly approaching, and he made a new goal to transition from playing in basements to hosting a concert by the big day. The band rented space at Joe’s Café, invited 125 friends, and hosted its first public performance.

Receiving the guitar “was the 10-year evolution before playing my first performance,” Willis said.

Now, Scarface and the Mobsters plays a show once a year to once every other year. He’s also written an original song, which he hopes to record someday. Additionally, other members of the band have written two other songs.

Music is “a very creative outlet for someone like me, who’s very structured,” he says. “It’s good to say, ‘You know what? You can’t control the music.’ You just kind of have to let it flow. It just helps me approach problems.”

The Sisters Seeing All 50 States 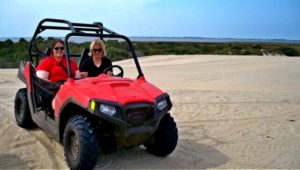 If you ask Tammy and Melissa Asher what it’s like to work with your sibling, they’ll share a few stories.

Tammy “was in the coffee room once, and I heard her scream and just laughed and went back to work,” Melissa says. “People were running and were like, ‘Are you not worried’ and I said: ‘Oh, that’s not her ‘I’m hurt’ scream. That’s her, ‘someone startled me’ scream. She’s fine.”

When they’re not working together in the RehabCare division at Kindred Healthcare – Tammy serves at the accounting manager while Melissa is the director of finance – they enjoy crossing items off their bucket list together; they are on a mission to embrace their mutual love of travel and visit all 50 states.

Growing up, their family enjoyed traveling to places like Australia, New Zealand, and Spain. But after taking a trip to North Carolina, Tammy and Melissa decided that they’re ready to see every corner of the United States.

“As I’ve become an adult, I’ve realized that I really like to drive [through] the country,” Melissa says. “We’ve got this amazing country, and I haven’t seen half of it.”

So far, they’ve crossed about half the states off their list and note that a favorite destination has been Asheville, North Carolina, where they zip-lined, went white water rafting, and flew in what they’ve described as Snoopy’s Red Baron flight with aviator goggles and all.

Tammy and Melissa crack up when describing the flight—because they were only one button away from flying the plane themselves, something they were not prepared to do.

“And this man said, ‘Don’t touch anything,’ and you’re like ‘What? I’m an accountant! I don’t know how to do this!’ Because apparently if we touched this thing, we would have actually taken over flying!”

The sisters noted that instead of seeing tourist attractions, they try different, less-seen adventures in each state, including the roaming the beach with their dogs in Cape San Blas, Fla. and riding roller coasters in Minnesota.

On a recent adventure, the pair found themselves among the mountains in Colorado.

“Brilliant over here decides that we’re going to learn how to ski in Telluride,” Melissa said, pointing to Tammy and laughing. “I learned that the way to stop is to fall.”

Next up on their travel list, Tammy and Melissa are headed to Michigan along with planning a 21-day trip to Alaska.

And their deadline for visiting all 50 states?

“The checklist would say sooner rather than later,” they say. “But money says maybe not everything right away.”

Using His Skills for the Benefit of Others 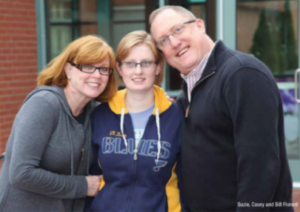 (Photo courtesy of The Miriam Foundation)

Bill Florent understands the fulfillment of lending his financial skills to not one but multiple entities.

During working hours, he is the “de-facto CFO,” he says, of his business, Selequity, an online capital-raising firm that helps people invest in commercial real estate more efficiently.

He has found a way to weave his financial skills into his off-hours too. For the past 15 years, he’s served on the board, including as president and on the finance committee, of the Miriam Foundation, a school that helps children with learning disabilities.

Last year, The Miriam Foundation expanded its services to include a high school program, which led Florent to give his support to the school by helping efforts to raise money through the capital campaign.

“Many, many non-profits are limited in who they can hire, so typically, they bring board members who have a variety of skills … to help them supplement their staff,” Florent says. “They all have budgets, and sometimes they’re small budgets. How do you stretch the dollar? Where do you raise more money? Those are things I can help them with.”

He has witnessed firsthand how having specialized high schools benefit children with these needs, including his own daughter who has a developmental disability.

In addition to his work on behalf of Miriam, Florent serves on the board of Easterseals Midwest, a nonprofit that serves those with intellectual and developmental disabilities, and is in his second term as treasurer.

Once again, his professional skills come in handy.

He has used his background in entity mergers to help the organization acquire affiliate chapters in Kansas City, Springfield, and St. Joseph, which expanded Easterseals Midwest across the state.

Nonprofits “certainly need your money,” he says. “They need your connections with other parts of the business community, but they need your talents.”

Florent sees volunteering in the community as a way to use his skills to serve others and hopes others will follow that lead.

“My former boss would say, ‘As you go out and find something you want to do in the community, find something that you’re passionate about,’” he says. “That way, you’ll give more to it. These are things that help my daughter specifically, so I help in that regard.”

Burchard & Associates is an executive search firm specialized in accounting and finance recruiting across all business sectors, including manufacturing, retail, wholesale/distribution, healthcare, financial services, and more.

If you’re searching for a new position in accounting or finance, be sure to check out the latest job postings on our website and LinkedIn.